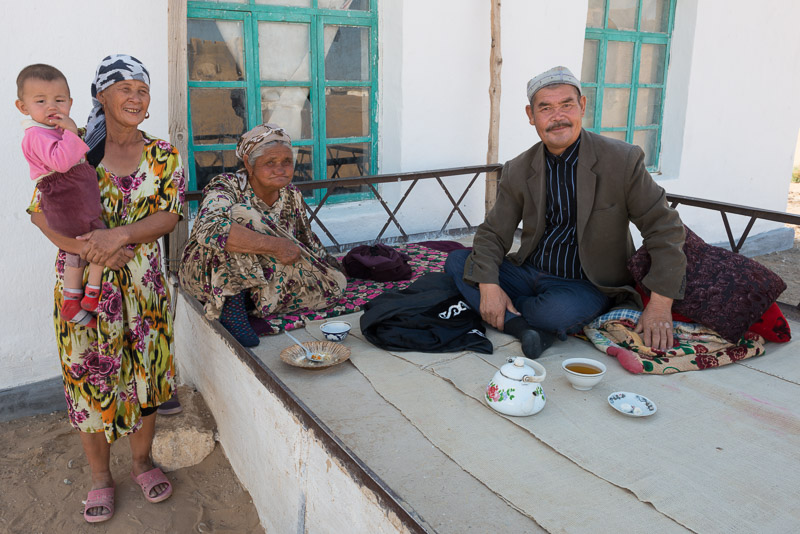 Join us at the Crossroads of History!

Although travel is theoretically more possible than at anytime in the last 18 months, and countries - from India to Cambodia - are opening up for overseas tourists, the long-haul travel industry is taking some time to bounce back. We are no exception. Before the pandemic, our tours would often sell-out within a matter of days of being announced - these days things are tentative at best. You can help us though: if you know anyone who you think would be interested in any of our tours or courses, then please consider forwarding this email on to them - or direct them to this link, where they can sign up for themselves. Thank you! This could make a huge difference to us being able to successfully run tours in the near future.

Our first tour of next year is a return to the fascinating country of Uzbekistan in Central Asia. This is a little known part of the world, and on this newsletter we will let you know some of the reasons why we think that this could be the perfect destination for you, and show you some of the things you can expect to see.

Uzbekistan has been at the Crossroads of History for centuries. Lying on the so-called Silk Route between Europe and Asia, it was invaded by both Alexander the Great and Gengis Khan, and was where Babur, who founded the Mughal Empire which ruled Northern India, originated from.

Babur's Great Great Grandson, Shah Jahan, is famous for creating the Taj Mahal, and you can see the early origins of the classic Mughal style of building in the architecture of Uzbekistan. This is typified by the countless domes, and Islamic-inspired decoration.

In the 20th Century, Uzbekistan was a part of the former Soviet Union, and so there is a smattering of brutalist Soviet-era architecture mixed amongst the mosques and madrassas. The Soviet period can also be seen on market stalls, where trinkets from the period are still sold, as well as in the somewhat un-Islamic habit of serving bottles of vodka like wine in many restaurants.

Uzbekistan is home to Samarkand: one of the great iconic traveller's cities. It is a place that many people would dream of travelling to - even if they couldn't place that it is Uzbekistan. There are other great cities too, with evocative names conjouring images of often cruel Emirs, ruling with absolute power from formidable forts, and of camel trains plying the Silk Route. 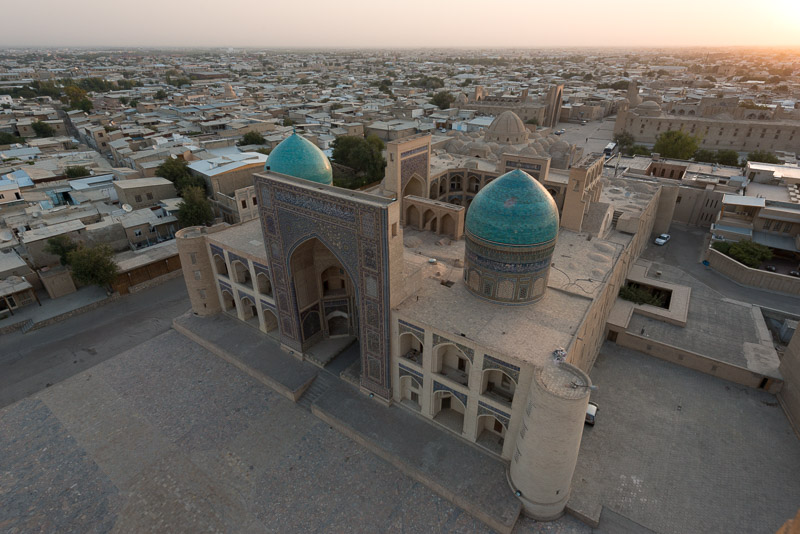 In the cities of Bukhara and Khiva, you can still see the walls of their great fortifications. In Bukhara this is the impregnable Ark Fortress; in Khiva the city walls weave atmospherically around the old town, harkening back to the days when the soldiers of warring Emirates patrolled. 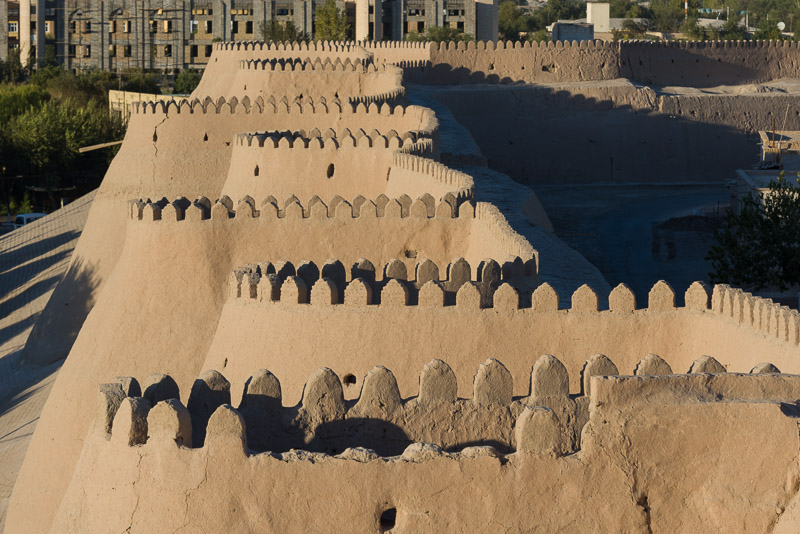 Of all of the influences on Uzbekistan, the greatest is Islam, and the quality and detail of Islamic architecture in Uzbekistan is unrivalled. The turquiose blue of the tiling and decoration is a memorable feature of many of the surviving buildings, and their minarets still tower over the cities, in a formal complex which is known as a Registan. This is a main square, which was used for civic and religious gatherings, and which was surrounded by Mosques and Islamic schools known as Madrassas. 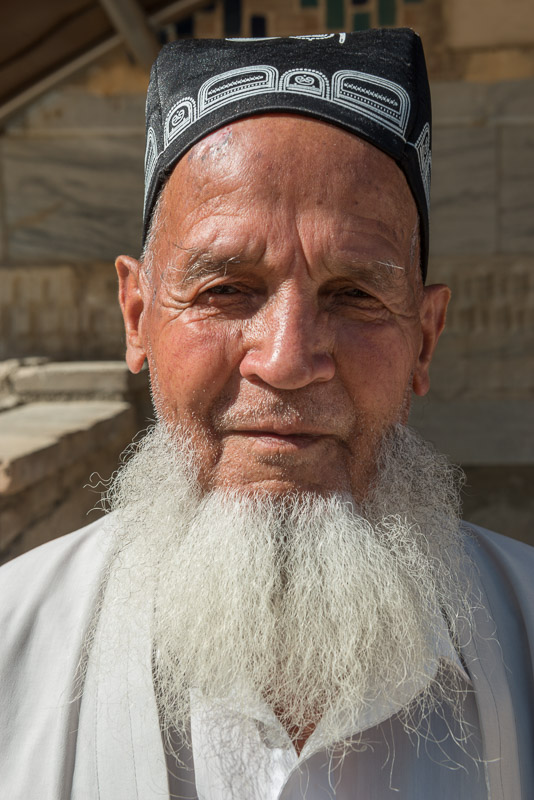 I have travelled to Uzbekistan a number of times, and this will be our second photography tour to the country. True to form, I am breaking new ground with this trip. This includes travelling into the remote Fergana Valley and also into the Kyzylkum Desert, where we will explore two ancient forts that have been swallowed by the sands of time. We also hope to see some of the local Bactrian Camels, which are raised in the region.

Another new location is the traditional village of Darband, where we will be able to enjoy and witness a more rural existance, whilst staying in a local guesthouse. This will give us a great balance with some of the larger, and sometimes more modern cities. 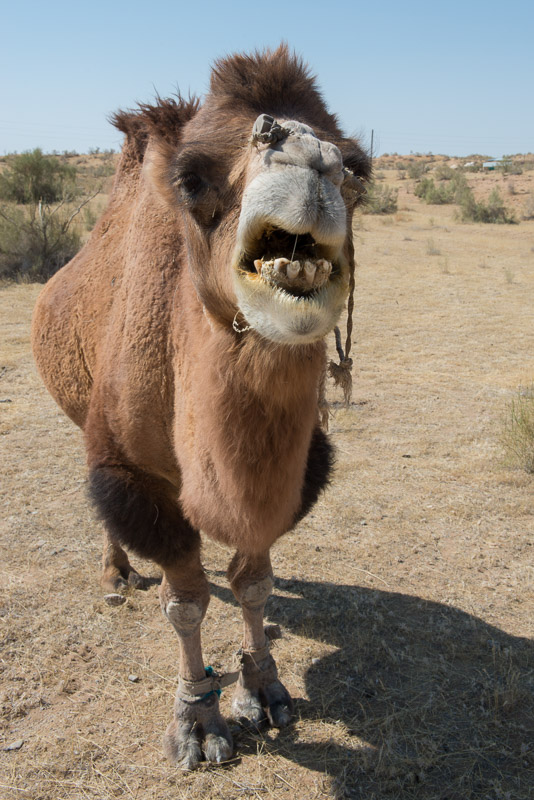 The capital of Uzbekistan is Tashkent, which has modernised greatly since independence in 1991, when the country broke away from the crumbling Soviet Union. Tashkent still boasts a traditional Registan Square, but also government buildings, Soviet and post-Soviet statues and modern plazas with fountains. With many capital cities, there are times when you might struggle to realise exactly where you are, but in Uzbekistan, you will still find people in tradtional dress in even the most contemporary locations.

It is the interaction between local people and architecture - whether traditional or modern - that can form some of the most iconic and striking images of the country, and this aspect of photography will be something that we will concentrate on. If nothing else, it is a fantastic way to add a human touch to your architectural photographs. 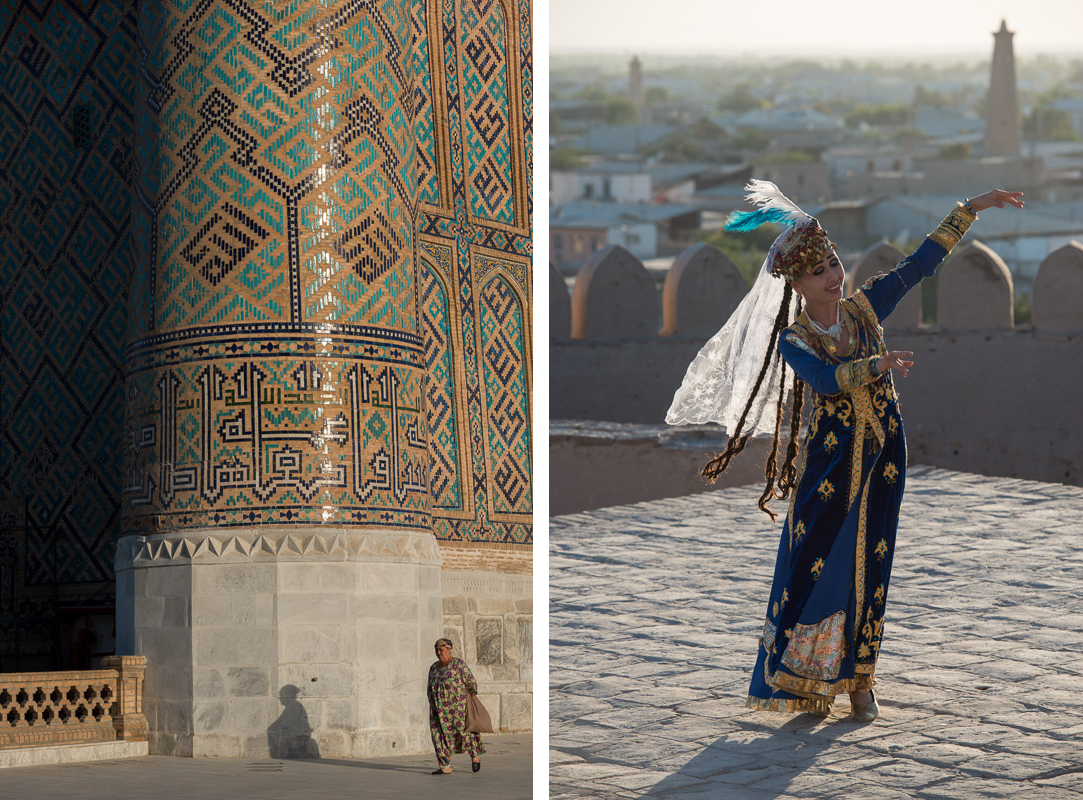 Markets are popular in Uzbekistan, and we will have pleanty of opportunites to visit and photograph them. Some of these markets are in large, purpose built halls; others are more basic, local street markets. All boast an entrancing mix of spices, pulses, vegetables and dry goods - sold by remarkably enigmatic and friendly stall-holders.

The markets give you a sense of Uzbekistan cuisine. As befits a country in Central Asia, it is a mix of Asian, Middle Eastern and European influences. The staple are large bread loaves, that are freshly cooked daily. Every town and region seems to have their own local style, and some of them will be stamped or etched with traditional patterns. 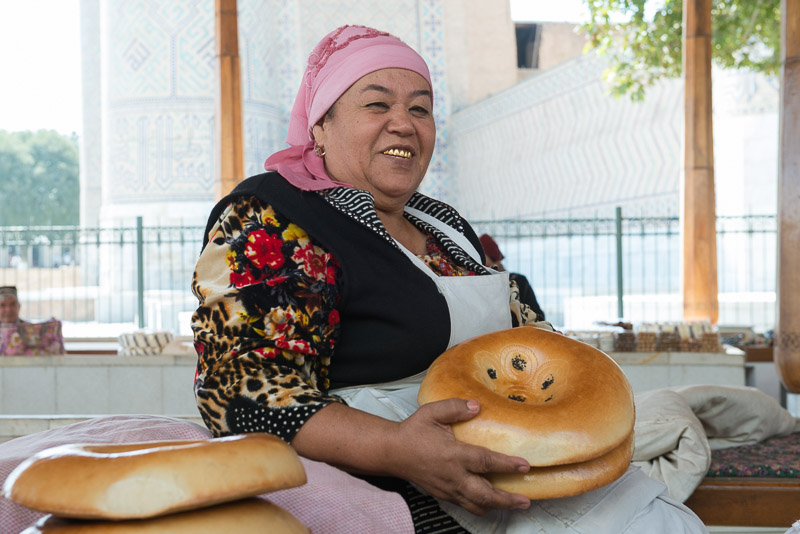 More than anything on this trip, you will come back with many memories and engaging portraits of the people that you will meet. The Uzbekistan people are both friendly and photogenic - often with a propensity for the sort of gold teeth that would suit a Bond villian. The mix of civilisations, religions and cultures can be seen on many of their faces, and their warm welcome to strangers is a producot of Islamic culture and being on the a crossroads where so many civilisations have passed through the country. 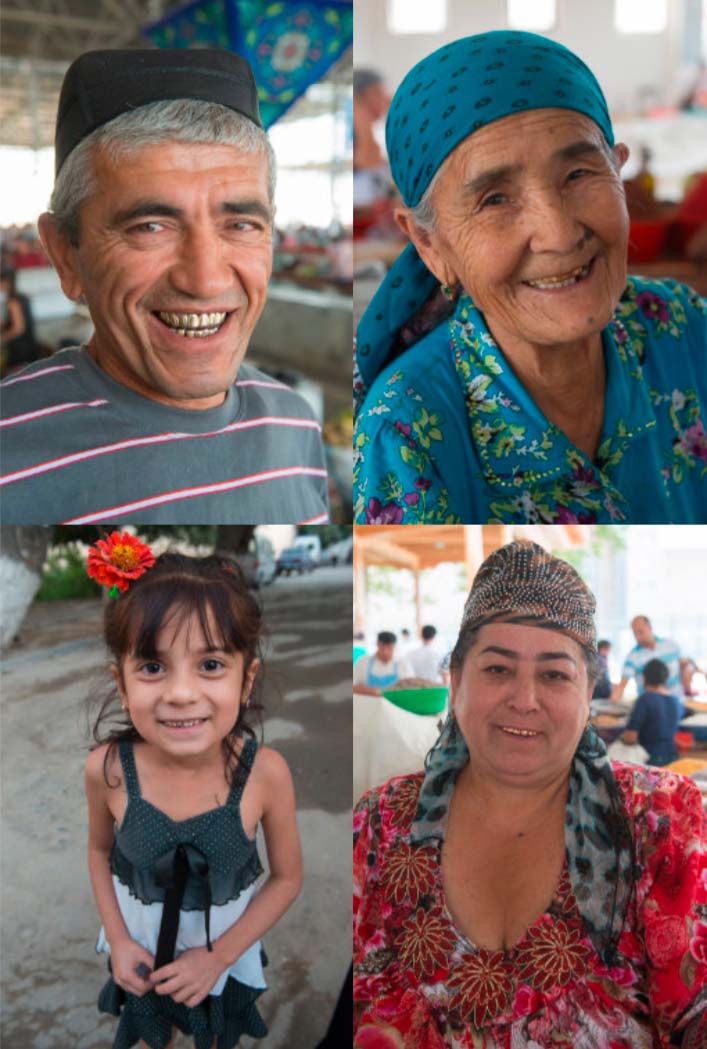 Impressions of Uzbekistan departs from Tashkent on 9 May 2022 for 13 days. Under our new variable pricing policy, the cost is from £2150 per person if 8 people travel to £1895 per person for the full 12 people. You can see more information on this link. You can see the full itineray on this link and download the pdf for the tour here.

Our private local courses allow you to treat yourself to some intensive one-to-one tuition in some of the most stunning and iconic landscapes in the country, or even to a private photography course with a group of friends. This is the perfact way to focus on the areas that interest you, and concentrate on the skills that you want to improve.

This time of year is the perfect time for shooting in the UK: not only can you enjoy the glowing Autumn colours, but sunrise and sunset are at a far more civilised times, and you can often see your subject with a dusting of morning mist.

Photographically, you can concentrate on photographing birdlife, brush up on technical skills like stacking images and shooting long exposures, or even learn how to shoot astro-photography.

Since Steve moved down to the West Country, he has been exploring his local area, and now has a range of options for photographic excursions. These include extensive photography tours on Dartmoor, explorations of Dorset and photographing the wildlife and landscapes of Somerset.

This can include the mass gatherings of tens of thousands of starlings. These can be photographed as they rise en masse just before sunset, and also they return to roost in the evening. This is often when they weave together in co-ordinated shapes and patterns known as mumerations. Inbetween, you have the option of photographing the various bird and nature reserves that form the Avalon Marshes in Somerset, where Buzzards, Marsh Harriers and Great Egrets are common, and where Otters are sometimes seen.

You can see sample course itineraries on this link.

Other scheduled tours for 2022

Apart from our featured Impressions of Uzbekistan tour, we have a couple of other exciting tours organised for 2022 that also still have places, which will see us head to some of the most photogenic parts of the World. All of our 2022 tours are organised through Intrepid Travel, which means that you have the full back-up and industry protection of one of the largest and most experienced players in adventure travel.

After Impressions of Uzbekistan we head to the high altitude region of Ladakh in the North of India. This stunning region is home to countless Monasteries and Buddhist Monks, and the feeling is more reminiscent of Tibet that India. More information on Impressions of Ladakh on this link.

Our final departure in October/November 2022 is a return to India, where we will explore the vibrant desert state of Rajasthan, visiting the iconic Pushkar Camel Fair and the lesser known Bikaner Mela. More information on Impressions of Rajasthan here.

If you have any questions at all about anything on this email or would just like to say hello, then please do get in touch. The simplest way is to reply to this email.

If you would like to know why you are receiving this email, please feel free to email us and ask! We will be able to tell you exactly when and how you signed up! If you want you can unsubscribe here.